Sky'Lee is a long-ranged support, utilizing magic locked within her to manipulate energy, allowing teleportation and various clever tricks to help keep her allies safe!

The first support of the game, Sky'Lee excels in speeding up and slowing down her allies and enemies respectively. She lends her allies shields by teleporting to and from with Portal. She can also help her allies retreat with Energy Field when she's not using it to keep her enemies from doing the same. She can also do that with Singularity, not only slowing everything inside it down but also dealing damage-over-time! And on the rare case that she does end up not being able to escape, she can give herself a little more time to be saved with Chronocopy.

Her abilities are enhanced with by her runes that give her quite a bit of variety. She can make her abilities do a little more damage, increase the effectivity and range of her speed-based skills, or even start to give her added features such as silence and stun.

Lighthearted, childish, and a seeker of adventure – Sky'lee arrives to the Arena of Heroes with a youthful outlook on the universe that has since been lost to many of her fellow competitors. This runaway of royal blood gains her Spark’s magical powers from mysterious tattoos of unknown origin. Stored within glowing disks, the energy allows teleportation and even unleash deadly blasts upon her enemies in a moment’s notice.

Before making an appearance on the Ritual Planet, Sky'lee was one of the many refugees upon a massive yet over-crowded space station called The Tower. The perpetually floating hunk of metal has become a sanctuary for the inhabitants of Riarar following the destruction of their home at the hand of the Devourer. Thanks to the Forerunners interference, some of the population was rescued and brought to the station and are awaiting a successful attempt at finding a new planet.

Having never had the opportunity to see her home, Sky'lee was still one of the first to be saved from certain demise. Sky'lee herself is not a natural birth, but was a genetically flawless creation bred and born in a test-tube, destined to be a Riararan princess. Their only purpose is that of a forebear for the planet’s newest clans, and more specifically for that of an entire planet when the time has arrived they find a new home. However, Sky'lee turned out differently than expected by the breeders as something that was never quite seen before…

Sky'lee was born with special abilities that resembled magic, which originated from one of the Sparks of Life that was within her. Nevertheless, the power of this Spark was easily stored and manipulated, allowing Sky'lee to harness it as both projectiles and as a means of teleportation. This ability attracted the Forerunners to her, seeking Sky'lee to be one of the first candidates for the Arena of Heroes. The Riararan breeders on the other hand were unwilling to let her leave, as she proved crucial to the survival of their entire race. Their decision was respected, leaving Sky'lee to remain on the Tower alongside her people. Yet, a few months later, she appeared on the Ritual Planet to offer her assistance in the fight against the Devourer.

It turned out that Sky'lee had used her teleportation to escape the Tower and, after a series of misadventures, found her way to the Forerunner’s planet. She claimed that this battle was more important than becoming a genetic donor for millions of future Riararans who would, in the end, just be consumed by the Devourer. This is what she said, at least. In truth, Princess Sky'lee had an entirely different mindset. The prospect of spending years in a lab and sharing her cells with the breeders repulsed her. She would much rather seek to quench her endless thirst for combat, adventure, discovery, and insurmountable challenge! 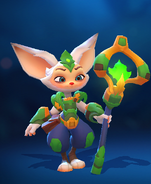 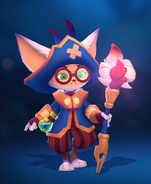 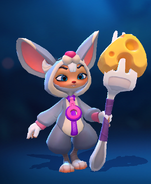 During beta-testing, she used to be called Teleporter.

Community content is available under CC-BY-SA unless otherwise noted.
Advertisement