Edit
watch 01:36
We're Getting Mutants in the MCU - The Loop
Do you like this video?
Play Sound

Dozer is a mighty tank using his brutal strength to destroy everyone in his way.

This rhinocerous juggernaut can both definitely take the beating as well as dish out just hard. With Static Shield, he is currently the only warrior class with a skill that gives himself a shield without any rune enhancements. He can also throw his foes right into towers or his allies range with Horn Fling. His pride and glory, however, and the true mark of his rhinocerous DNA is in Battering Ram, charging right into the fray. And all of his abilities are compounded with Volatile Voltages that shock anyone that gets in his way!

Oddly enough, he has the fewest defensive runes among all the Warriors, with only two healing runes and two shield runes. However, he has a number of damage enhancers and a plethora of stunning runes that make it harder for his opponents to counter his attacks, and those are where he truly shines.

Klaus von Dozerfurt is an outstanding scientist, experimenter, and winner of numerous awards for genetic engineering has always wanted to be a little stronger and a little less clever. Why? From childhood, Klaus wanted to join the Guardians and to lead troops to defend the innocent against the dangers of the galaxy.

However, the Guardians, not only did not accept Klaus in their ranks but also quite sharply ridiculed the "lab rat, who can only handle flasks." This, devastated von Dozerfurt. He swore to himself to become stronger at any cost and prove those arrogant Guardians that he is worth to be a part of the squad!

No one can say today when von Dozerfurt began to conduct experiments on himself, everyone just saw the results. The bio-material of a Rhinoceros perfectly matched with the DNA of Klaus, turning it into something more than just a man. Klaus von Dozerfurt was no longer here - his place was taken by Dozer, a mortally dangerous criminal and wanted by the Guardian Corps.

One must say, Dozer does not hide from them - on the contrary, he happily enters the fray with the Guardians wherever they may be! The newest hobby of this walking tank became runs in and out of the citadel! Dozer deliberately gives himself up, to make another grand escape from the citadel and thus proving the prison faulty. As they say, to each his own...

Using a unique combat system developed back when Klaus von Dozerfurt was still around, Dozer became an unstoppable machine of destruction. And he is willing to break anyone who doubts his power... especially the Guardians! 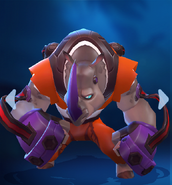 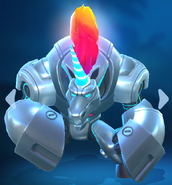